Little Guy in a Cone

My brother, Little Guy, got "the cone" last night. His left eyelid was red and swollen. We're not sure if he got into it with a squirrel or what. Later, he scratched at it and it was bleeding, so my mom found this cone to make him wear. He is not a happy camper. Apparently, humans find dogs in cones to be quite humorous, but I don't get it. I feel bad for the little dude!
Labels: little guy, the cone
Posted by Rusty at 8:19 PM 0 comments 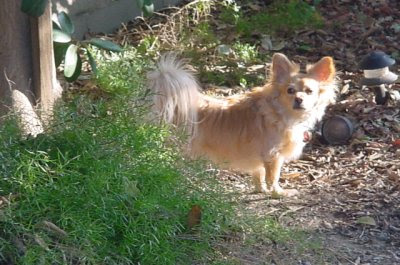 Labels: for lack of any better material
Posted by Rusty at 1:28 PM 0 comments

Number of cats and dogs euthanized by shelters each year:
3-4 million (HSUS estimate)

Number of cats and dogs adopted from shelters each year:
3-4 million (HSUS estimate)

Number of animal shelters in the United States:
Between 4,000 and 6,000 (HSUS estimate)

Percentage of dogs in shelters who are purebred:
25% (HSUS estimate)

Average number of litters a fertile cat can produce in one year: 3

Average number of kittens in a feline litter: 4-6

In seven years, one female cat and her offspring can theoretically produce 420,000 cats.

Average number of litters a fertile dog can produce in one year: 2

Average number of puppies in a canine litter: 6-10

In six years, one female dog and her offspring can theoretically produce 67,000 dogs.

This post was inspired by an email proposition I received to father some puppies! Flattering as that may be, I am neutered and have no interest in adding to the already overpopulated pet world.

Do the right thing! Spay and neuter your pets! It's good for overpopulation and good for their health. My sister Cosette most likely would not have had mammary cancer if she'd been spayed at a younger age. Many communities have reduced-cost or even free spay/neuter programs.

Image Of The Day